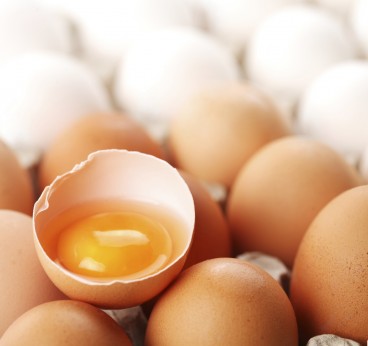 I spent much of my high school years working at a small town grocery store. I worked in the freezer and dairy departments, stocking frozen pizzas, yogurt, ice cream, and uh huh, eggs. Three days a week at 6:00AM, I would pull pallets of frozen foods off of semi trucks, rushing them as fast as I could into different coolers, knowing that every second they were out in the 68 ° grocery store, was a bad second.

Having never bought eggs in Europe, I was a little surprised to read recently (from an article last fall) that eggs are not stored in coolers in Europe, but right next to flower, sugar, and cake mixes, in that dreaded 68° grocery store heat.

In her article, "Why American Eggs Would Be Illegal In A British Supermarket, and Vice Versa," on Forbes.com, Nadia Arumugam outlines the differences between American and European eggs, listed below.

It seems strange and unsanitary that eggs would be left out at room temperature, but in reality, it's less black and white. The EU most likely considers the egg's cuticle protection enough from disease, and thus maintaining a cold temperature is relatively useless. Instead, the EU argues that if temperatures are not consistently maintained (back to the imagery of my racing pallets of eggs around my hometown grocery store) condensation can form on the outside of the egg, which facilitates the growth of bacteria on the shell. The USDA, however, limits the spread of salmonella and like diseases with refrigeration, rather than a reliance on the cuticle and hen vaccination.

For the complete article, go to http://www.forbes.com/sites/nadiaarumugam/2012/10/25/why-american-eggs-would-be-illegal-in-a-british-supermarket-and-vice-versa/3/.