Creating a HACCP Plan: What Your Organization Needs to Ensure Food Safety

Food safety is an underlying concern touching every corner of the food industry, from manufacturers and distributors to the consumers ultimately eating the food. Hazard Analysis and Critical Control Points (or HACCP) is an internationally-recognized method of identifying and managing the risks related to food safety, designed to keep the food in question safe from farm to table.

In this document, we will provide an overview of how organizations can develop and implement an effective HACCP plan. We will begin by discussing the history and origins of HACCP. Then, we will talk about why HACCP is important for any food manufacturer or provider. Finally, we will offer guidance on getting started with your HACCP plan, and how to put the plan in action.

A Brief History of HACCP

HACCP concepts were originally developed by Pillsbury in 1959 in response to NASA’s need for pathogen-free foods for astronauts in space. HACCP improved upon previous quality control methods, which relied on repeated sampling and uncertain results, by establishing “critical control points”.

In 1971, the National Conference on Food Protection presented HACCP to the public. A year later, when a botulism outbreak occurred due to canned potato soups, the FDA developed regulations for low-acid canned foods which contained many HACCP principles.

HACCP became codified in federal food processing rules and regulations in subsequent years.  In 1985, the United States National Academy of Sciences cast attention on HACCP again by publishing guidelines which strongly promoted HACCP as an effective system which could prevent pathogens and improve processes for the safe manufacture of food products.

The implementation of HACCP principles finally became federally-mandated starting in 1997.  President Bill Clinton announced a Food Safety initiative with the U.S. Food and Drug Administration (FDA) which mandated HACCP’s use in the seafood industry, and recommended that the guidelines be applied to the entire food industry.

In the next few years, the FDA issued HACCP regulations for meat, poultry, fresh fruits and vegetables, and juice. The 2001 Food Code issued by the FDA incorporates HACCP principles to examine and control risks related to food safety in foodservice and retail environments. The food code was updated in 2005 to reaffirm the need for HACCP to keep retail food safe, emphasizing bean sprouts, juice, and populations susceptible to food-borne illness. Allergens are also discussed as a food safety risk in the 2005 Food Code.

The FDA Food Code was most recently updated in 2017, and includes more specific guidance on how to implement the HACCP plan, such as the establishment of critical limits and corrective actions that may be necessary in various situations.

Why HACCP Is Critical for Any Food Manufacturer or Provider

HACCP is a system which provides the framework for monitoring the total food system for maximum safety. The system consists of seven steps used to monitor food, whether on the manufacturing or foodservice side of the operation. It focuses on identifying and preventing hazards that may render food unsafe, something that is certainly top of mind as food safety received extra scrutiny in the wake of the COVID-19 crisis.

Some benefits of HACCP over previous systems include that it is based on actual science, and that it allows more efficient and effective government oversight due to recordkeeping requirements that can help regulatory agencies better determine how well a firm is complying with laws and following mandated food safety practices. HACCP also helps food companies compete more effectively in the world market. As a result, the international community widely recognizes HACCP as the gold standard for food safety.

Since HACCP was widely instituted at the turn of the 21st century, failures in the food production chain have been less widespread, but continue to occur. Some failures have occurred due to a lack of HACCP plan: in 2015, a tamale producer was forced to recall its products because, as FSIS stated, a hazard analysis was not performed to determine likely safety hazards.

Other failures continue but can be easily remedied once identified, such as an E. coli outbreak stemming from packaged salad that occurred in September 2019. The outbreak of E. coli resulting in foodborne illness was traced back to contaminated lettuce grown in the Salinas Valley region of California. The FDA discovered that the outbreak was due to lettuce in the salad mixes being contaminated, prompting them to suggest corrective action and asking consumers to avoid buying those salads until the HACCP plan could be updated.

Thanks to HACCP, such errors, once identified, can be quickly addressed and mitigated.

For another example, one may remember the Jack in the Box E. coli outbreak occurring in 1992 and 1993 which was found in 11 lots of hamburger patties and sickened over 750 people over the course of several months. Three people died.

The outbreak cost the company over $20 million in revenue. A short time later, in 1994, Jack in the Box instituted a HACCP plan, and today they remain a leader in the fast food industry. HACCP helped Jack in the Box recover from a damaging outbreak, and no such incidents have happened at the burger chain since.

Getting Started With Your HACCP Plan

As we have discussed above, a HACCP plan is essential for any food manufacturing or distributing enterprise. That’s why you should start thinking about HACCP at the earliest stages of your product development cycle. There are several steps you should take before you actually create a HACCP plan in order to set yourself up for success:

Assemble a team, including a qualified leader, and specialist(s) with subject matter expertise, to develop a HACCP plan.

The first step in creating a HACCP plan is to put together a team of individuals who have specific knowledge and expertise in your product and process. This team should be interdisciplinary and draw on expertise from different fields including engineering, production, sanitation, quality assurance, and food science. You should also include local staff who are involved in your food manufacturing and/or distribution company. Additionally, consider recruiting experts in potential hazards (e.g., biological, chemical, physical dangers in the food operation) who can advise your team on its HACCP plan.

Develop product descriptions and intended uses for each food product.

Make use of flow diagrams to help guide your HACCP plan.

Creating a flow diagram is an important first step to develop a HACCP plan. Food industry organizations should develop a flow chart which includes all aspects and activities of the production process. The process begins with obtaining ingredients, then making the product, and typically ends with packaging the product, storage, and distribution.

The flow diagram should detail the earliest stages of the process, and conclude when the food product is out of the establishment’s hands. The flow chart should also be easy to read and understand.

Putting Your Plan in Action: The 7 Principles of HACCP 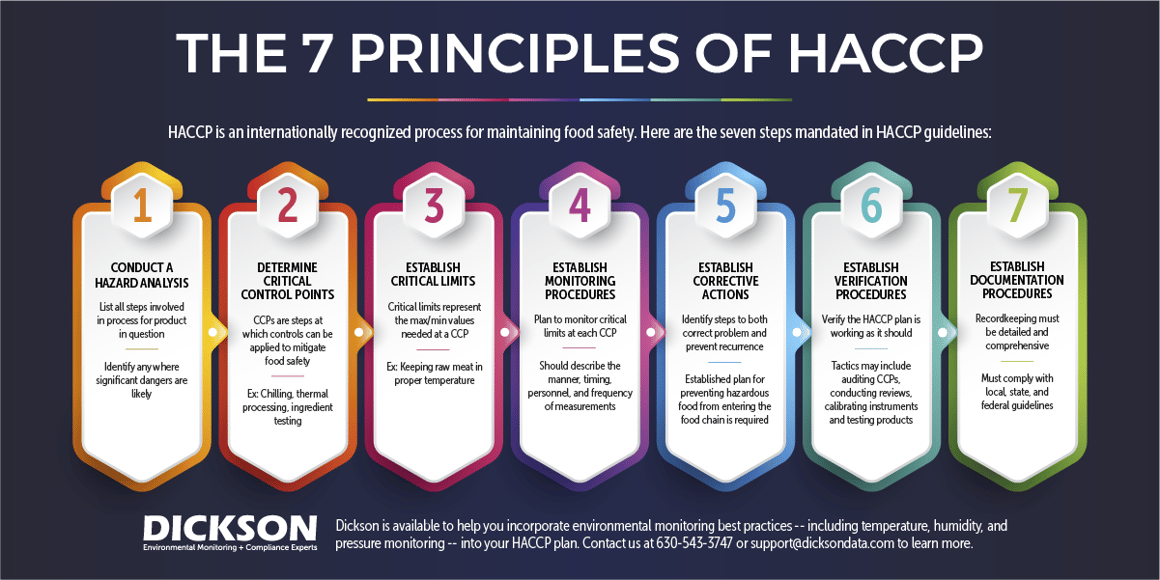 The first step in HACCP is to conduct a hazard analysis.  To conduct a hazard analysis, first list the steps in the process.  Then, identify any potential steps in the process where significant dangers are likely.  This initial step is important because it helps the HACCP team devise a plan that can prevent, reduce, or otherwise control dangers related to food safety.

Examples of CCPs that can be applied to mitigate safety risks include chilling, thermal processing, control of product formulation, and testing ingredients for unwanted residues or metal contaminants.

The number of CCPs needed for an organization may vary depending on the exact steps involved. Enterprises which require more stringent food safety procedures or those dealing with poultry or meat processing may require more CCPs, for example.

Critical limits are defined by the FDA as “a maximum and/or minimum value to which a biological, chemical or physical parameter must be controlled at a CCP to prevent, eliminate or reduce to an acceptable level the occurrence of a food safety hazard. A critical limit is used to distinguish between safe and unsafe operating conditions at a CCP.”

A simple example of this would be the temperature range at which raw chicken needs to remain at a production facility to ensure its safety.

Continuing with the raw chicken example, a packaging facility seeking to monitor temperature would need to determine each CCP where temperature fluctuation would be a risk and have proper monitoring equipment like data loggers in place along with the appropriate procedures for monitoring the data.

Corrective actions should be used to rectify measurements at CCPs which are found to be suboptimal. The HACCP team should devise a plan for actions that must be taken to prevent hazardous food from entering the food chain, and take corrective steps to fix the problem. This typically includes identification of problems, and the steps taken to assure that the problem(s) will not happen again.

The recordkeeping involved in this step must be detailed and comprehensive not only to comply with local, state, and federal regulatory guidelines, but also to provide documentation that the food was produced in a safe manner. Recordkeeping will include “information on the HACCP team, product descriptions, flow diagrams, hazard analysis, CCPs identified, critical limits, monitoring system, corrective actions, recordkeeping procedures, and verification procedures.”

HACCP plans have become indispensable to the foodservice industry. It’s important to get HACCP right — not only to stay in compliance with federal, state, and local regulations, but also to ensure safety for consumers and others in the food business.

About the author: Before coming to Dickson, Director of Services Antoine Nguyen spent more than 18 years in quality and validation roles in the pharmaceutical and medical device industries.