Dickson Test: Taking The Lid Off A Pot Of Rice 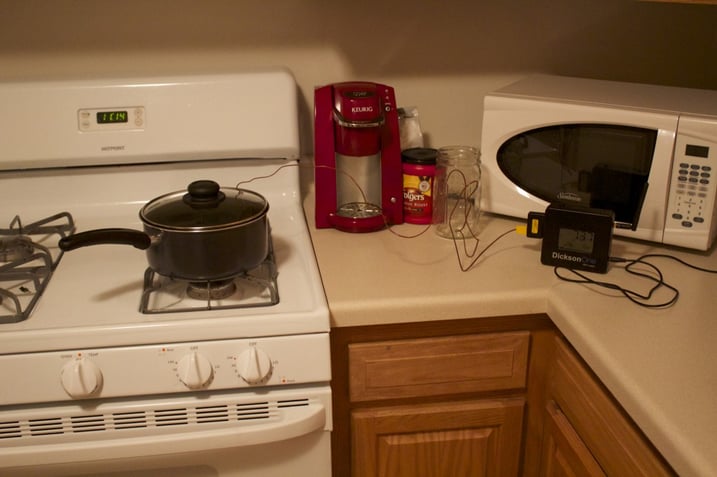 We've heard from word of mouth (and the internet) that you are NOT supposed to take the lid off of a cooking pot of rice, as doing so will ruin the consistency, stickiness, moistness, and overall quality of your batch. It sounds sort of correct, but is it? We tried to find out.

As temperature guru’s, we decided to test how much temperature you lose when taking the top off of a boiling pot of rice for a brief amount of time, and then what happens to that rice once you do that.

While we can’t say for certain how much it affected the quality of the rice we cooked (some of you may like your rice a little different than others), we can tell you how much temperature was lost, and what the rice looked and tasted like compared to a control group in which we didn't lift the lid. Here’s what we did, and what we found . . .

How much heat does the air inside a simmering pot of rice lose when removing the lid for 10 seconds from the top of the pot? 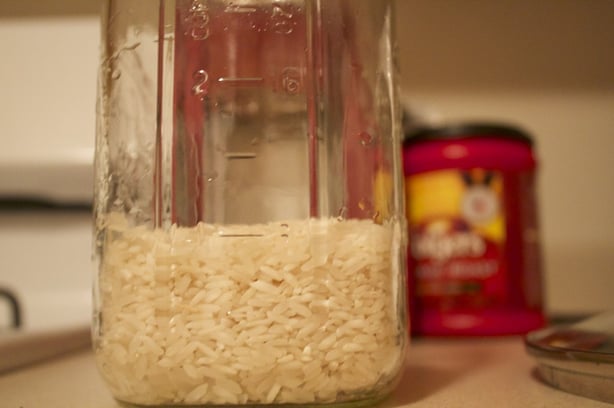 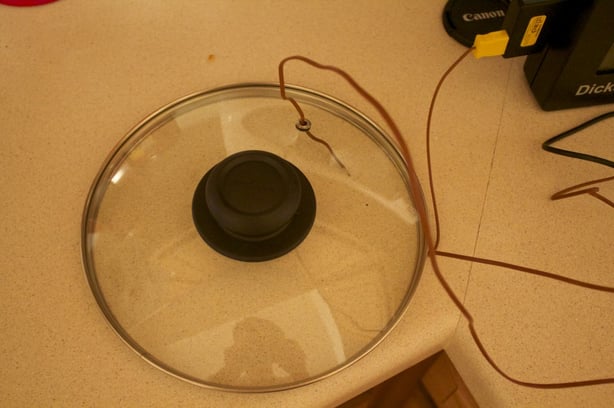 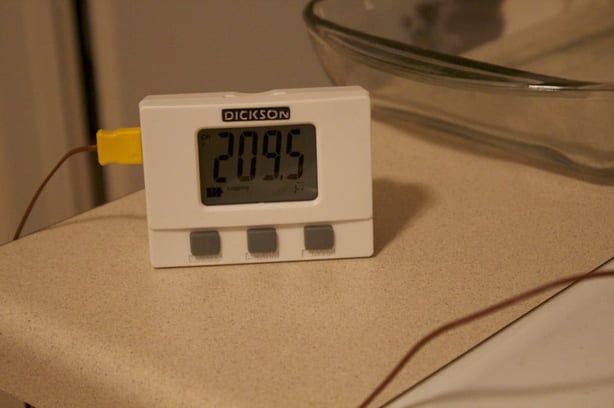 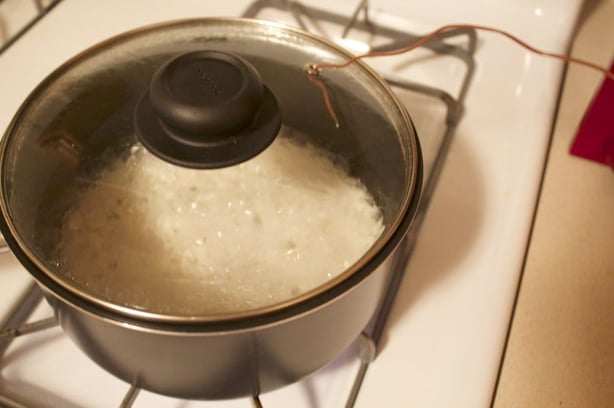 1 cup of rice was combined with 2 cups of water in a medium sized cooking pot. The rice and water were brought to a boil (uncovered) on a gas stove, taking 3-5 minutes. Once the water began to boil, the heat was reduced on the stove to a low simmer, and the rice was covered with the pot’s glass cover, which has a hole in the top to let a little moisture and air out.

We snaked a K-Thermocouple probe through that hole, and down 1.5 inches into the ambient air of the simmering rice and water.

The first test was our control group. 1 cup of rice and 2 cups of water were combined, boiled, covered, and allowed to simmer for 15 minutes. During that time we did not take the top off of the pot.

Below is the graph of that test:

As you can see from the circled area of the graph, the ambient air of the simmering rice and water sits consistently above 200 degrees for the entire duration of cooking. The rice took about 12 minutes to cook, and the exact data points only fluctuated from 209.7F to 211.8F during the time the probe was immersed in the ambient air of the cooking rice.

So, we had a temperature of around 210F for the ambient air temperature at 1.5 inches inside the simmering pot of rice.

We tested our experiment three times. Below is an explanation of the test, and what we found:

Tested variable: While there are some variables unaccounted for in this test (explained at the end of this post) we did attempt to control for one variable when measuring the temperature of the ambient air in the pot: Lifting the lid off the pot for 10 seconds, and then placing it back on the pot.

We planned to lift the lid, but hold the temperature sensor at the same height in the pot.

The test: 1 cup of rice was combined with 2 cups of water, and placed in a medium sauce pan. It was brought to a boil with a gas stove, heat was reduced to simmer, and a glass top was placed on top of the sauce pan. We removed the lid off of the pot for 10 seconds 7, 4, and 9 minutes into cooking. For the first test we used a DicksonOne WFT23 Data Logger with a 1 minute sample rate. For the second and third tests we used a Dickson SM320 Data Logger with a 5 second sample rate. The three tests took place at 10:48pm, 11:15pm, and 11:51pm, central standard time. Each test took approximately 15 minutes.

Here is one of our data graphs:

This was consistent in all of our findings.

We found that on average, temperature immediately dropped 95.9F. It then quickly climbed back up to a high temperature (in both cases the temperature inside the pot after the lid was put back on the rice was at approximately 190F 30 seconds after putting the lid back on. However, increasing the temperature from 190F to 210F never totally happened by the time the rice was done cooking in any of the three test cases.

Humidity: Dickson will be attempting (it’s really hard to test the humidity of a 100%RH air solution immediately after you decrease the pressure and temperature) in the near future. For now, we took care of temperature.

So what about the taste? From our observations, leaving the top on a simmering pot of rice does indeed make the rice taste better. What we saw and tasted was that the amount of moisture and temperature lost influenced the consistency of the rice. It made the top of the pot of rice dry, and the bottom of it stayed wet.

If you have something temperature or humidity related that you would like us to test, leave it in the comment section below!