New Developments in Rio have Doctors Scrambling for a Solution

The Olympic games have traditionally brought hope with them wherever they went.

One of the main reasons they even exist is to contribute to the search of peaceful and diplomatic solutions to the conflicts that exist around the world. It’s called the Olympic Truce, a tradition dating back to 778 BC during the original games in Ancient Greece.

They’ve also often meant a boon to local travel. In 2013, Britain’s tourism industry appeared to expand considerably following the 2012 Summer Olympics in London. Foreign visitors were up 30% YOY from July 2012 to 2013 setting a new record, with spending up 12% overall.  You can see how tourism has trended over the last five games below. 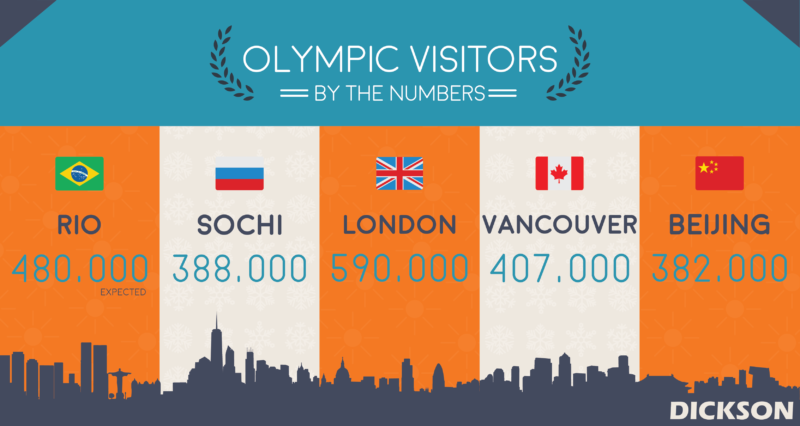 This year, though, the games are quickly approaching and half of all tickets still remain on sale. The reasons are plenty, whether it be political protests, economic recession or disease, but the one that has athletes most concerned has gotten a lot of coverage in the media.

Take Irish golfer Rory McIlroy for example. This week he announced that he wouldn’t be attending the festivities because of fears related to the Zika virus. That’s a big hit for a sport that is being reintroduced to the Olympics for the first time in 112 years. He wasn’t the first to back out because of fear, a variety of other golfers, cyclists and soccer players have already withdrawn or voiced considerations for doing so, and, with new developments on the disease being released this week, he likely won’t be the last.

According to Forbes, Zika isn’t a disease that only affects pregnant women and newborns as previously believed. Instead, it can have fatal consequences for anyone who contracts it. The article discusses evidence that has built over the last several months that Zika also causes Guillain-Barré Syndrome (GBS), a disease that causes your own immune system to attack nerve cells. This leads to rapid paralysis and, in some cases, even death.

In French Polynesia, 42 patients were identified with GBS, and all but one tested positive for Zika. The apparent connection between the two, and the severity of GBS, has led 200 doctors from around the world to sign an open letter to the World Health Organization. It “call[s] for the Rio 2016 Games to be postponed and/or moved to another location—but not cancelled—in the name of public health.”

The letter goes on to mention that the games being held in Rio is a major factor in their decision. They view the city as the epicenter of the disease with more than 32,000 cases so far. Whether the disease started there or not is irrelevant to the ever growing truth. Without a suitable vaccine, the Olympic games will be a catalyst for spreading the disease even further around the world. There’s little that hope can do about that.