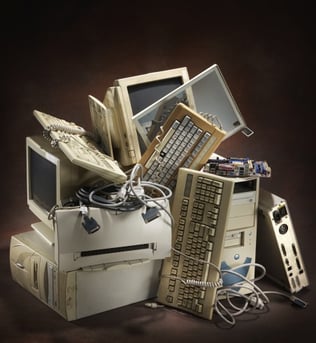 Once a week, for thirty minutes or so. These "sessions" will help your coworkers go from saying "I'm not real tech-savvy," to "Yeah, it was Port 80." Oh, and try not to make them too much like Michael Scott's meetings. We know, "Who's got the time?" You do. This will save you time later, so educate now.

Instead of buying new hardware for every change in virtual communication your EHR system goes through, use what you have. It's coming up on the end of the quarter and I'm sure budgets are a little tight, so something you can do for relatively cheap that will save you money is to fix communication bugs between devices. Many times, we find that our customers will have separate pieces of information traveling to separate devices, when all that information could head to one device. Limit your hardware if possible!

And then point to your company's power bill next month and say to Accounting, "Boo-ya."

4. Use AWS, or other cloud applications for projects.

AWS stands for Amazon Web Services. I'd like to backtrack for a quick second: AWS can be a bit of an undertaking. But, the point is to rent, instead of buy. When you are working on a project within your Healthcare IT team, use sound judgment when it comes to the long term scope of the materials you purchase. If you can store data in a cloud application, or add on to the amount of storage you are currently using in the cloud, consider it as a cost-saving option. Projects don't always have to mean purchasing new hardware.

This will put a limit on those Ethernet and HDMI cables that for some reason cost $55 a piece. Towards the end of a year or quarter, a silly purchase of 13 keyboards from a retail store can hurt bigger than you expect. So ban those purchases, or have them require approval.

6. Think about allowing people to work from home.

The pros and cons of working from home have been well-documented (just google work from home vs work from office) for the past year or so, especially after Marissa Mayer sent Yahoo remote workers back to their desks. I'm not here to say that your HIT team could benefit from working less at the office and more from their homes, I'm just saying consider it.

7. Streamline ticketing system, or if you still don’t have one, get one.

A ticketing system (if you are in HIT, you are most likely aware) is a way to submit problems/issues/tasks to IT teams for them to fix in some semblance of order. "Some semblance" is sadly usually the case, and IT Teams often find themselves fixing the same problems more than once, or never fixing particular issues at all. Streamline can be overused, in fact I've mentioned it in two points already. But in this case, it means a very general sense of reevaluate, and then reorganize. Think about how your ticketing system is currently used to solve problems, and then ask "how can this be better/more efficient."

For an hour, for a day, for however long you have, do it.

Too often, Hospital IT teams were forced to implement EHR systems too early, added EPF’s too late, incorporated the cloud in the wrong places, and have old servers doing absolutely nothing. Consolidate all of that as much as possible. Use less to do more.

When in doubt, yup, interns. It may sound harsh, but interns can be cheap labor, and invaluable to your staff, doing everything from getting coffee to finding a code issue in your EHR system.