You may have noticed, but between session hopping, travel and research, time got away from us a little bit. But, don't fear, there is a lot more content still to come from our experiences at SXSW. We will be covering the below sessions in more detail in the coming weeks and will make sure to link back to them here so you always have a place to check.

Thanks for following along and we hope you enjoyed the ride!

Another interesting session we got to visit involved Hacking Pharma and learning about getting into the industry. We also learned about some of the industry's biggest needs from digital health. Click below to see our notes from the event that we took on Twitter, and check back in the weeks that follow for a more in-depth look at the session.

Yesterday we had the opportunity to sit and listen to some great things. Unfortunately, when you're frantically note taking, your computer tends to die, thus, no updates yesterday. It's a shame because there were some excellent topics on the docket. Yesterday we talked about Innovation in Healthcare through Telehealth, as well as whether or not the food industry needed a data standard. Spoiler Alert:  It does.

We'll write some individual pieces on both topics in the weeks that follow, but if you're interested in learning more now, you can find the threads we kept on Twitter @DicksonData. Click the images below to link to the start of our coverage for both conversations. 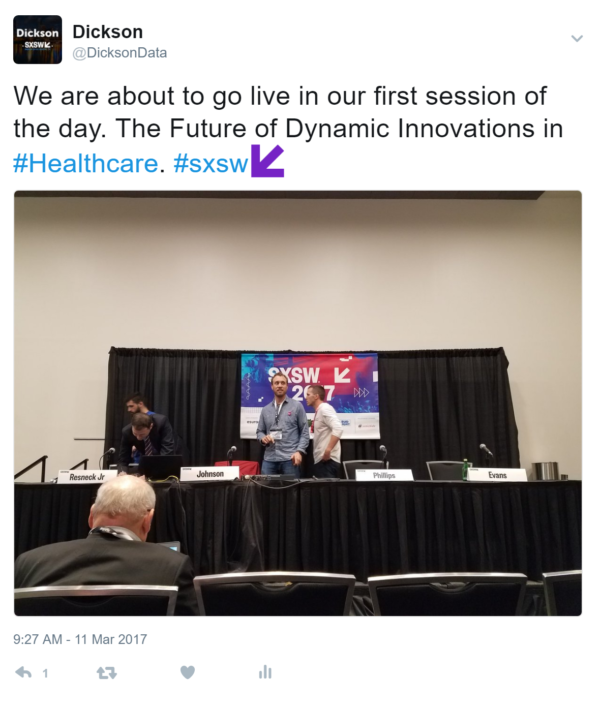 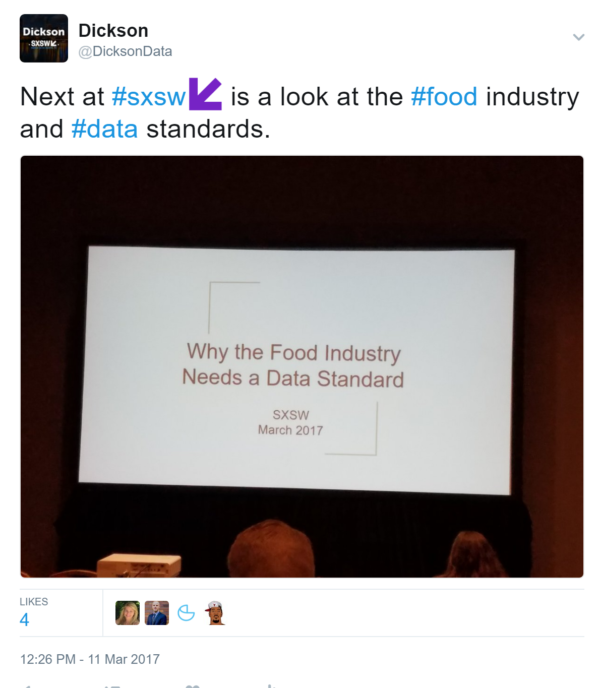 Today we'll be learning about how we can avoid a Diabetes Avalanche (something we've covered many times here in the past, including how Dogs could save a diabetic's life) and what it's going to take to get us to Mars.

Follow along on Twitter, and keep checking back over the next several weeks for more in depth coverage on each of the topics.

Hope is a powerful thing. Providing it to those who, at times, feel they have none is an even more powerful one. It's one of the ultimate points that could matter. That's why it was incredible to sit and listen to three speakers talk about their experiences as amputees.

Melissa Stockwell was the first female from the Iraq war to lose her limb in active combat. As an above the knee amputee, she was able to go on and compete at two Paralympic Games and received a bronze medal in the 2016 Rio games for the Paratriathlon.

Melissa was also a founding member of the non-profit organization Dare2tri. According to their website, Dare2tri is an "organization with the mission to positively impact the lives of athletes with physical disabilities and visual impairments by developing their skills in paratriathlon." Visit their website to learn more.

Heath Calhoun was a new father when he lost both of his legs in combat. After spending more than two years in a wheelchair, he finally found himself connected with the right prosthetics that would, eventually, allow him to walk again. Today he's hoping for more.

Now, he's a certified peer visitor of the Amputee Coalition of America (ACA). Through the organization, he makes himself available to others who have lost limbs and provides emotional and informational support to them. He's also an Alpine Skier.

"(With) the monoski and the snow, the ball was back in my court. I could go anywhere I wanted on the mountain."

Christy Wise is an active duty pilot who lost her leg in a hit-and-run boating accident while paddle boarding near Shalimar, Florida. The injuries she sustained required her right leg to be amputated above the knee. She is once again piloting and recently participated in the Invictus Games as an athlete and is a Paralympic hopeful. It's why she has five legs at home; six, if she counts the one that's permanently attached.

"The second you help somebody else, your own problems seem smaller. I think (that's why) being a foster parent is better for me than the kids."

All three of the sessions wounded warriors were incredible, resilient people. We're grateful to live at a time when they've had the opportunities they've had to carry on even after their amputations. We're even more grateful to have had them standing up in defense of our country. It's their strength that carries the hopes of our nation. That can be a powerful thing.

Over the next week, we'll be live tweeting and blogging from Austin, TX as we learn all about innovations in healthcare at SXSW. The show itself is tabbed as being "the premier destination for discovery." At Dickson, we pride ourselves on our curiosity. For us, every point can't matter if we aren't curious about how we can do more, and you can't know how to do more unless you're curious enough to discover it for yourself. Data may be what we do, but it doesn't define us. You do.  Whether you're our customers, our readers, our friends, our family, or anyone that doesn't even fit into that category, you matter to us. It's why we work so hard to help our customers manage their assets and succeed in their audits. That kind of work protects not only the companies that require monitoring, but it protects the customers they are selling to.

Follow along as we share what we learn throughout the day, and as we (at least try) to provide a wrap up at the end of each of them. Today we'll be learning about how Wounded Warriors are transforming biotech and the ways that the LGBT community is driving digital health innovations. Feel free to join in our conversation in the comments below or on Twitter @DicksonData. Look forward to speaking with you all soon!