In healthcare, surgery is used to diagnose and treat a range of ailments. Every operation requires anesthesia, and every time anesthesia is used, the exhaled fumes are removed from the operating room and released into the atmosphere. Most surgeries use either sevoflurane or desflurane, and medically speaking, there is little difference between the two. Many anesthesiologists typically pick one option and continue to use it based on personal preference. 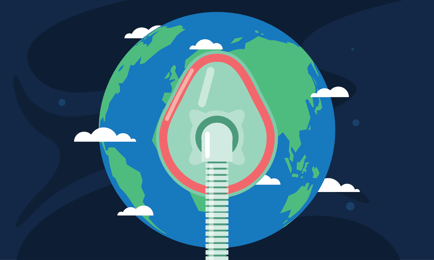 Environmentally speaking; however, the difference is significant. Desflurane is 20 times as powerful in trapping heat in Earth’s atmosphere as sevoflurane. It also lasts for up to 14 years, whereas sevoflurane breaks down in just one year. But what does that mean across the country, and the world? The United States health sector contributes to 10% of the nation’s greenhouse gases, and the World Health Organization calls climate change the top public health issue of the 21st Century.

Yet despite this considerable green difference, many healthcare facilities are unaware of the impact these fumes can have. One anesthesiologist, Dr. Brian Chesebro of Providence Hospital in Portland, is passionate about environmental causes. He spent time researching the gases he uses in surgical procedures and discovered the difference for himself. When he showed his findings to his colleagues in the field, they were stunned to learn about the adverse effects the gas has on the planet. Chesebro explained that the use of desflurane was the greenhouse gas equivalent of driving a fleet of 12 Humvees for the duration of each surgical procedure while sevoflurane is the equivalent of half a Humvee.

Not only is the environmental impact significant, there are also financial benefits. Sevoflurane is considerably cheaper than desflurane. In Chesebro’s hospital, switching saved them $13,000 a year. When each of the eight hospitals in the Providence Health network switched, they realized approximately $500,000 of savings annually.

Prioritizing the use of sevoflurane is a simple switch in many cases, requiring a simple choice during each surgery. Despite this, some anesthesiologists are resistant to change. Dr. Chesebro and his administrative colleagues emphasize that data and education are essential to proving their case. By explaining both the environmental and financial results, it helps to overcome most concerns.

While the environmental impact of desflurane and sevoflurane may pale in comparison to other greenhouse gases, Dr. Chesebro argues that any small, positive change is worthwhile. Although sweeping innovations in healthcare are creating a positive difference for patients around the world, sometimes simple changes like this can make a huge impact. After all, what if better outcomes from surgery could be combined with better outcomes for our planet?