The Value of a Good Night's Sleep

Part two of a two part content series on sleep, health and energy costs for consumers and healthcare facilities.

As we learned in part one of our series, a good night's sleep may actually be more tied to your body temperature than to ambient light. That means your home may need to see a drastic temperature reduction to maximize your ability to rest. If you keep your house at 70℉ or 72℉, you need to drop the temperature in the evenings. According to studies, 65℉ is optimal, with temperatures as low as 60.8℉ if you like typically use several layers of blankets. That would mean a difference of anywhere between five and ten degrees, and depending on where you live and the season, that can make for a costly proposition.

According to estimates, a 1℉ change on your thermostat can mean as much as a 3% increase in your bill. That means if your bill is normally $50 then a 10℉ change could raise your bill to as high as $65. That may not seem like a tremendous change for your home, but it can add up quickly if you’re trying to adjust the temperature inside of a larger structure, like a hospital.

If you were to consider a theoretical hospital wing of 300,000 sqft similar to the one that just opened at Ball Memorial Hospital in Muncie, IN, you may be surprised by the amount spent to keep the lights on. Power provider ConEdison has created a tool to allow you to estimate energy costs based on a number of criteria including building type, age, size, and needs. Below you can see estimates on energy costs for one year of service for such a facility. 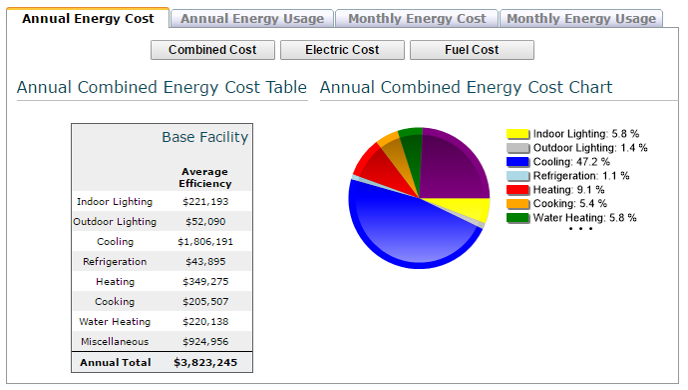 These costs are based on an average heating temperature of 70℉ and cooling temperature of 72℉. Estimating an increase in cost when changing the temperature from 72℉ to 65℉ is difficult, because such a change would only happen in the evenings, and in most cases, only in certain portions of the hospital. However, if all things were equal, such a change would cost this facility an additional $400,000 in cooling costs. After about $50,000 in savings on the heating bill, the hospital could net out at a $350,000 increase in annual operating expenses.

Another energy provider has published a number of recommendations to help hospitals recoup costs some of their energy costs. According to research conducted by NationalGrid, lighting, heating, and hot water represent between 61 and 79 percent of the total energy usage in a hospital, depending on climate. They’ve targeted those systems and put together a list of ways to save money in each. Below are a number of the recommendations that they’ve made across a variety of categories.

While the savings from the above may not offset all additional spend that’s required in order to provide patients with the best possible sleep, taking the steps necessary to manufacture good sleeping weather means providing a healthier environment for patients. At the end of the day, that's what healthcare is all about.