The Shocking Truths of Static

We’ve all probably experienced it. The loud POP that goes off when you reach in to touch a metal doorknob on a dry day. There’s a tiny flash of light where your hand had been as you quickly recoil it in reaction to the tingling sensation this zap induces in your hand. It’s all caused by a small spark of the annoying phenomenon known as static electricity.

The spark itself is something you’re likely familiar with. However, what you may not know is that a tiny spark between your hand and a door knob has the potential to release a thousand volts through the air. That’s an extremely high number, and not only because it has three zeroes. It’s also extremely high in comparison with other power sources you may be more acquainted with. Below is a chart that shows the voltage of a number of varying power sources.

You’ve probably learned by now that sticking your finger in a standard outlet isn’t a good idea. If that’s the case, then why isn’t more damage caused by static that creates voltage that is nearly 10x as much? It’s because voltage is not the only consideration when discussing electricity. There are three things that one must consider when looking at the dangers of electric shock.

Voltage (volts) is a quantitative expression of the potential difference in charge between two points in an electrical field.

Resistance (ohms) is the opposition that a substance offers to the flow of electric current. The thicker a substance is that the power is traveling through then the less resistance that exists.

Current (amps) is a flow of electric charge that’s carried by moving electrons.

When talking about electrocution, the voltage necessary is dependent on the current through the body and the duration of the current. Ohm’s Law (Current = the voltage/resistance) states that the current drawn depends on the resistance of the body. Below is a list that discusses how to determine the lethality of electric shock.

Based on the above list, the most dangerous part of electricity to the human body is the current. As little as 0.2 Amps can be fatal depending on the person because of its effect on the heart. This is the reason why the much lower voltage of a wall outlet can kill you. The average socket you’d see in a home puts out somewhere between 10 and 20 Amps to power your electronic devices. The typical static electricity you’d encounter when touching a doorknob contains a current that it negligible. That’s why the 1,000 volts caused by the pop when you touch a doorknob doesn’t kill you.

Does that mean that static is harmless?

Not exactly. Mother nature has the ability to create a form of static electricity that can kill you instantly:  Lightning. While scientists are still working to confirm their theories regarding lightning’s connection to static electricity, they have a working theory in place as to how clouds become positively charged.

Clouds are made up of billions of tiny particle like ice crystals. These particles rub against one another in the cloud because the clouds are full of big air currents. As these crystals collide with one another, electrons are transferred leading to a positive charge. Often, these charges move from cloud to cloud as the positives and negatives are attracted to one another.

Where as a standard spark of static that escapes your hand onto a household doorknob can contain 1,000 volts, a single bolt of lightning can contain as many as a billion. Even with that much charge, a direct lightning strike doesn’t necessarily guarantee death. In fact, according to LiveScience, approximately 90 percent of those struck by lightning survive the encounter; however, those who survive often suffer from long-lasting neurological damage.

According to the Washington Post, only 3-5% of all deaths and injuries are caused by a direct lightening strike. 50-55% involve ground strikes where the current spreads as far as 60 feet out from contact, and another 30-35% are caused by side splash, an occurrence that causes the bolt to jump from an object or a person to another person.

I recognize static from when I touch a doorknob, but how is lightning the same thing? 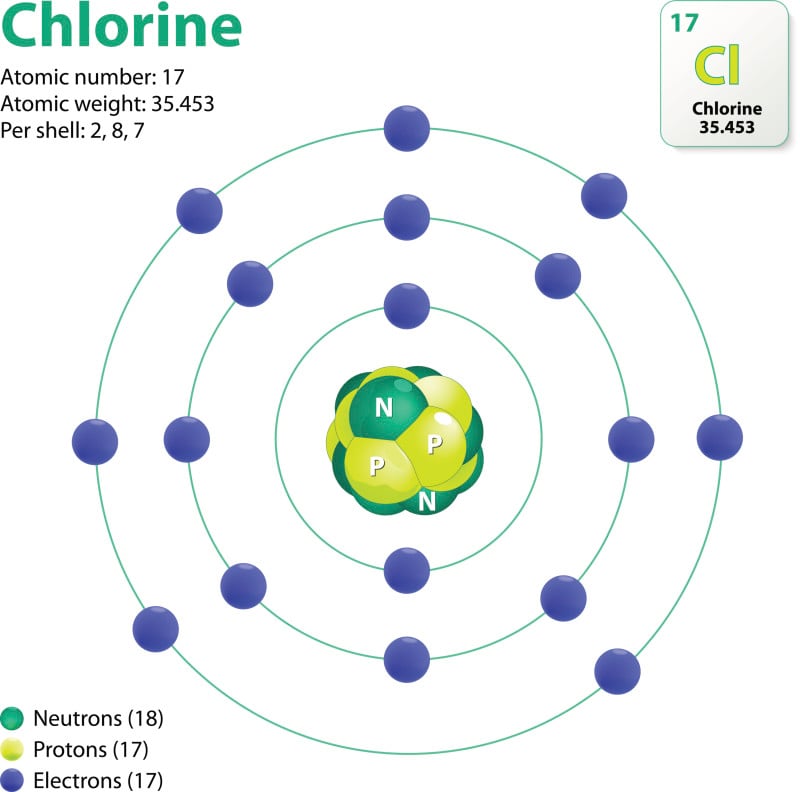 In the above example of a Chlorine atom, you can see that its nucleus, the center clump of the image, is made up of protons (+ charge) and neutrons (neutral charge) and is surrounded by a number of electrons (- charge). Electrons and protons attract each other in the atom in order to hold it together. That’s why we say, ‘opposites attract.’ It’s also the reason why atoms are typically balanced with the same number of protons as there are electrons. However, there are times when an atom will actually lose some of its electrons to another atom creating one that is positively charged and one that’s negatively charged. Static exists when there is a build-up of such opposite charges on objects that are separated by something called an insulator. Below is a great video to help explain the process.

These insulators are items that restrict the transference of heat or electricity. Air, itself, is a natural electrical insulator which makes sense when discussing static shock and its transfer between the human body and a door knob. Teflon, paper and glass are also examples of this kind of insulation.

In order to build up charge, a variety of items need to be rubbed together so that they can share electrons between each other. Here are a couple of examples where such charge can is created.

Are there other dangers involved with Static?

There are, because we aren’t the only ones affected by it. Static has the ability to ignite gases and liquids and has been the cause (or in some cases, expected cause) of many fires and explosions across the country and around the world. From gas station fires to chemical plant explosions, it is a real danger with the potential for deadly consequences. Below are some examples of static related accidents.

Are there things I can do to reduce the potential risk of these types of rare catastrophes?

Luckily, static is something that you can combat in a number of ways.

Whichever approach you take, it’s important to remember that these only help reduce the likeliness that an issue will arise. Combining the above list can help you remain even safer than you otherwise may be. Rare as explosions may be, if left unchecked you, your home and your workplace are at risk for serious damage. In the end, that’s the result that could end up being the most shocking.

If you are interested in learning more about how to monitor humidity in your home or facility visit https://dicksondata.com or call 630.543.3747 to speak with one of our experts. If you have a personal story based on the above topic, send it to jeff@dicksondata.com for a chance to be featured in a future blog or issue of Insights Magazine.