Too Much Moisture can be Bad for Your Health

Must is a scent you never want to reach your nose. When you smell it, you’re usually safe to assume one of two things. You’re either near mildew, or you’re near mold. Either can be dangerous to the body.

A quick Google search of ‘mold in schools’ will show you that many educational institutions across the US have had to deal with musty scents within their walls. It’s a problem that can occur anywhere without being properly cared for.

What’s the difference between mold and mildew?

At first glance the two different growths can be difficult to distinguish. They’re both growths of fungus, they both cause discoloration and they both require very similar ingredients to grow and thrive. However, they aren’t exactly the same, and one is much more of a problem than the other.

mildew on a kitchen counter

Mildew is a coating or discoloration that’s caused by fungi, which appears on fabrics, paper, leather, etc., when exposed to moisture and is characterized by a cottony,usually whitish coating on the surface of affected parts. It can be easily treated with a store bought cleaner and a scrubbing brush 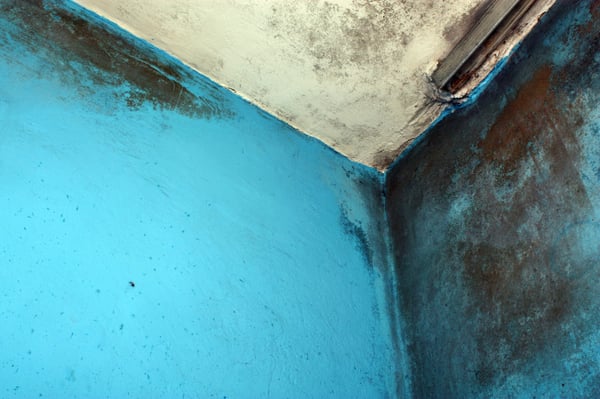 Mold generally develops as a circular colony and has a woolly or furry appearance. This fungus grows on the surface of organic matter like wood, food and meat, and causes it to spoil and decay. Removing large amounts of mold from your home can be an arduous process that involves sealing yourself in a room, gas masks, dangerous chemicals, and the rental of expensive equipment like a HEPA vacuum. Needless to say, it’s better to prevent mold growth than try and address it after the fact.

What are the key aspects of mold development?

There are a number of main ingredients that are required for mold to develop indoors.

Since you can find the first two at times within any indoor space, the real key is connected to moisture. While many relate mold to leaks in pipes, roofs or windows, one of the most preventable sources of moisture is often the one that is most often overlooked.

The level of moisture in the air varies by season and geography, but that doesn’t mean we don’t manufacture our own humidity in our homes. Below are a few examples of how indoor air moisture can be created.

While we are able to produce our own internal moisture, it’s important to note that the main reason humidity rises within a structure is because of a lack of ventilation. If moisture can’t escape, it builds up. As it builds up the humidity rises. As the humidity rises, it becomes more difficult for moisture to dry out. It’s a dangerous cycle that can eventually cause the level of moisture in the air to surpass 55%. At that point mold is able to grow and spread.

The Effects of Mold on the Body

Different people can have different reactions to inhaling air that contains mold spores. Some people suffer irritations from the fungi.  Mold can cause symptoms in these people such as nasal congestion, eye irritation, wheezing, or even cause them to break out in rashes. Some people deal with serious allergies to mold which can cause a more severe reaction. This could cause fever, shortness of breath and respiratory illness. It can even trigger Asthma attacks in those with the condition. The Center for Disease Control and Prevention (CDC) has also noted that recent studies have suggested a potential link of mold exposure to young children and the development of asthma. The chronic lung disease  accounts for nearly two million emergency room visits each year and kills nine Americans every day.

According to the University of Minnesota Environmental Health Sciences Division, mold is also dangerous to the body through ingestion or absorption. When we ingest the fungus on spoiled food, it affects the digestive system and can cause diarrhea, dehydration, nausea and stomach cramps. Dermal absorption is rare and occurs through skin contact. Our bodies interact with mold often in the natural environment, but through personal hygiene, we are able to remove any contamination before it becomes a problem. However, if we do not keep ourselves clean, or are unable to clean our skin surface regularly, disease could exist.

Here’s a first hand account that was provided from Cindy Beckwith, a reader of the blog and the Dickson Insights magazine.

Mold is a health risk that too many people take lightly.  About six years ago, I worked in an office building with mold contamination.  During the early spring, the building was hit by a small tornado and flooding (that caused) the structure and carpeting to become saturated.  During the heat and humidity of the late spring/early summer, the windowless office I worked in began to smell musty.  Others from outside noticed and the handful of girls working alongside me in the small space we shared began to complain about the smell. I began to notice chest pain and a cough while on my afternoon walks around the building. The cough, chest pain and eventual breathlessness progressed enough for me to mention it to my doctor to investigate further.

After trying an inhaler to see if it would alleviate the symptoms, (to me and my doctor's surprise it did), he began asking questions about the building I worked in. I mentioned it was probably built in the later 70's, (was) windowless and recently flooded.  He suspected adult onset asthma from prolonged mold exposure and after I was examined by numerous specialists his suspicions were confirmed. I had begun to break out in hives from the mold in my office and had to eventually leave the position due to severe illness. Six years later my asthma persists though not nearly as bad. I use a daily inhaler and a rescue inhaler and probably will the rest of my life due to the prolonged exposure to mold damaging my lungs.

Cindy was willing to share the story in hopes that it could spare another person from experiencing a lifetime of physical issues.

Eliminating mold growth in your home

Since the key to mold growth is moisture, the key to stopping its growth is eliminating the dampness. Reducing the humidity in your home isn’t difficult but it can be tough to understand when you need to take action. The good news is that humidity can be easily tracked and monitored using data loggers so that steps can be made to reduce the air moisture before it becomes an issue. By creating additional ventilation using windows or vents, you can easily allow air to circulate helping to remove moisture from enclosed spaces. It’s also possible to use a dehumidifier to reduce issues in spaces with limited access to circulation.

If schools were required to track the level of moisture in the air within their buildings it’s possible that mold growth could be prevented before becoming a problem. Such a practice could even provide an environment where students would have access to a better quality of air. It may not make gym lockers smell any better, but it’d at least give parents a breath of fresh air knowing their kids were safe in what they were breathing.

Have a personal story related to this topic? Send it to jeff@dicksondata.com for a chance to be featured in an upcoming blog or issue of Dickson Insights.